Parents in Barrington, Rhode Island have slammed a woke school district for cancelling honors classes as part of a move to increase inclusivity and equity amongst students.

Barrington Public Schools were among the best in the state and known for equipping students for Ivy League colleges but have plunged 119 spots in official rankings since it changed its approach to teaching in 2020.

Parents voiced their outrage at a March 30 meeting, claiming the new structure of de-leveling – a system of universal learning – had impacted grades and access to merit scholarships for college.

De-levelling involves keeping all students, regardless of their learning abilities and strengths, in the same class by removing specialized programs.

A dentist father, who said he came from immigrant parents, acknowledged that de-leveling was was made for ‘someone like me,’ but said it will harm children, like his son, six, who also wants to be a dentist.

‘My parents came from Mexico, they didn’t speak English. I went to school, I started off from kindergarten to third grade before my parents could actually read my assignments. You guys have your own idea of what diversity, equity, and inclusion means,’ he said in a video obtained by Fox News.

‘It doesn’t take into account an actual person that has been through some of the worst public schools in Chicago, lives in neighborhoods where people are shooting each other, drug dealers and gang members. That’s where I grew up till I was about 12. So how come no one is asking me? I have a lot to share.

The father said for his son to follow in his footsteps ‘it sounds like he’s going to have to take honors classes’.

Scroll down for video 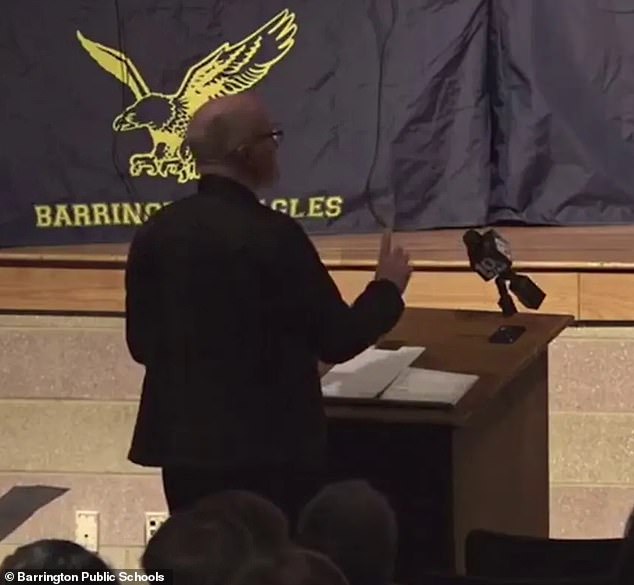 Another father (pictured) said the board’s claim that the move would ‘increase access’ to honors classes had failed as ‘it went from 50 percent of kids taking honors in this school, to less than 25 percent this year, to zero next year until you’ve made that change’

He said it ‘didn’t bother’ him to pay the high Barrington taxes to send his child to the schools, but said he ‘wasn’t going to sit through a school district that’s not going to give my son a chance to fulfill his dream of following in his daddy’s footsteps’.

The father slammed the notion of ‘diversity, equity, and inclusion’ as ‘radical left language’ and said it doesn’t ‘take into account what I think’ and it was the school board’s way to ‘shut someone up’.

He went on to suggest that taking away honors courses will leave the world with ‘average’ workers.

‘All of you guys probably have dentists, if you guys really believe in [equity], then pick and average or below average dentist, and see what you get. But that’s not what you guys do, you guys look at ratings and you pick the best that’s available,’ he said. 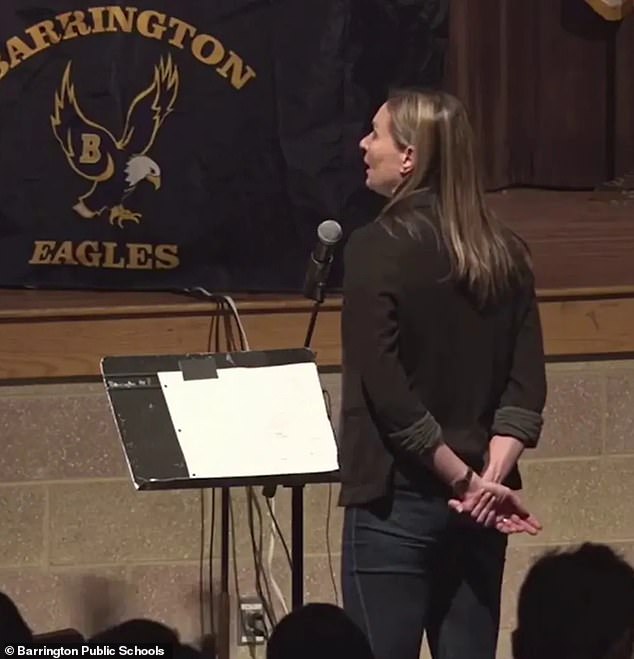 Another parent, who admitted his family moved to Barrington ‘for the schools’, claimed the move had decreased the number of students in honors classes to zero, despite the move designed to ‘increase’ that number.

‘The move to “honors designation” was supposed to increase access, but guess what? It went from 50 percent of kids taking honors in this school, to less than 25 percent this year, to zero next year until you’ve made that change. How is that opening it to more students?’ the second father asked.

He also slammed the board’s shift – which he claimed cost the school ‘tens of thousands of dollars’ – for not thinking about how this would effect ‘kids who are applying for financial aid or for college admissions.’

‘Not one top school in our state or Massachusetts has gotten rid of honors. Not one. And our consultant that you hired is all proud that we were going to be the first one. I’m not sure that’s something we want to be proud of,’ he said, before he told the board he had ‘no confidence in this administration’.

Another mother slammed the data the board cited as ‘manipulative’ and said the super-independent is ‘pushing her agenda’.

‘The school committee has failed again and again to listen to this community or to ask smart questions of the administration,’ she said.

‘And I now ask you to do what it is right, and it’s easy. Let me walk you through it. First, have the humility that this did not go as planned. It takes real leadership to admit you messed up. Give it a try.’

‘I don’t understand why English honors classes are being eliminated. Is English less important than math and science?’ the male student slammed. ‘In fact, all de-leveling has been protested by the students and parents…All this change does is sabotaged students’ education and backstab the families that move to Barrington so their children could get the best public education in that state.’ 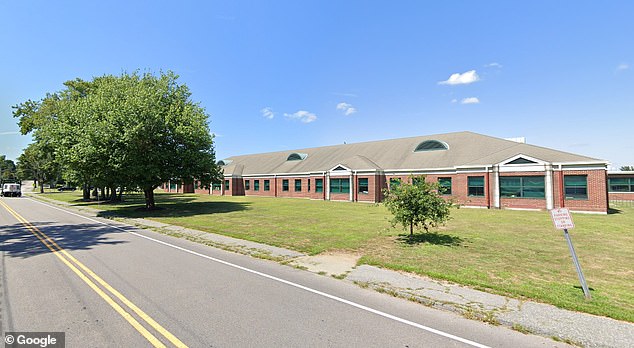 Schools in the district (pictured: Barrington High School) were among the best in the state and known for equipping students for Ivy League colleges but have plunged 119 spots in official rankings since 2020

Katie Novak, a representative for the school, told Fox News: ‘Too many individuals and schools support oppressive and ableist structures where access to advanced coursework is a privilege that students have to earn’.

‘All students deserve opportunities to access grade-level instruction and become expert learners and this is not possible when we continue to track students in different levels based on antiquated models of school success.’

However, a mother who has children with a special learning plan, said the ‘inclusive’ approach is harming her daughter, whose grades have dropped.

‘It [took away] any kind of individuality… or…personalized education plan for kids. It’s: “You’re just going to be some homogenized like education factory where they raise everybody’s the same.”‘

‘I don’t think I would ever be a fan of de-leveling, but the timing [to implement it during COVID] is what makes it very suspicious to me. So it just felt like it was an easy way for them to get their agenda through without pushback because people were so busy dealing with other stuff.’

Since de-levelling was introduced, first with the removal of Individualized Education Programs for students with disabilities in February 2020,  the school has dropped from 189th to 308th in the nationwide school rankings.

Barrington Public Schools declined to comment to DailyMail.com until the next meeting takes place on May 19.