The teaser of Kartik Aaryan’s upcoming thriller film has been released; we are talking about the film Freddy. In the film, he is featured as a shy-looking, introverted dentist named Freddy Ginwala, who appears to be a serial killer. The forthcoming film Freddy is directed by Shashanka Ghosh and will release on December 2 on Disney+ Hotstar.

Unsettling music plays in the background as the teaser begins. It describes Kartik as the dentist who is “lonely, naive, apprehensive, honest, introverted, and bashful,” among many other traits of the actor’s persona. In the daytime, he is observed attending to patients in a clinic. Kartik transforms into a murderer at night and drags a body into a jungle. 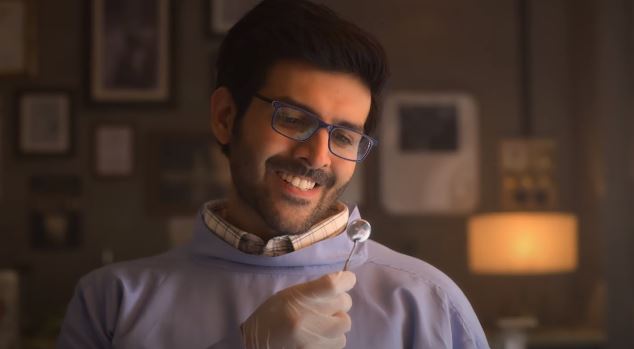 Kartik also appears to be a credible psycho-killer because of his eerie smile. In the longer than one-minute teaser video, he can be seen talking to himself, grinning, and even moonwalking.

ALSO READ: Rashmika Mandanna To Star Opposite Kartik Aaryan In Aashiqui 3? Details Inside

Meanwhile, speaking of the film, the Shashanka Ghosh-directed movie will keep viewers on the edge of their seats. Ghosh said, “A romance, a betrayal, and an ordinary man turning extraordinary is the story of Freddy. The power of Freddy is its incredible writing of each character, set, and background music. This kind of treatment required strong actors such as Kartik Aaryan and Alaya F. I am so happy to have found Freddy and Kainaaz in them. With Kartik Aaryan’s character in the film, the fans are going to be blown away seeing him in a never seen avatar. I am grateful for the opportunity that Balaji Telefilms, Northern Lights Films, and Disney+ Hotstar have given me, I hope the audience enjoys the film.”

Actor Kartik Aaryan shedding light on the preparation for the role, said, “Freddy was a complex script and character, the prep of the role had to be done physically and mentally as well. The character helped explore a different side of my craft and encouraged me to challenge my abilities at every step as an actor. The first time I got the opportunity to explore the dark side of me. The film will reach millions of viewers to watch it at their convenience with Disney+ Hotstar. I am glad to be a part of Freddy and excited to see the audience reaction for the film”