Oral bacteria sounds like something your dentist would tell you off about.

Yet just like your gut and on your skin, your mouth is home to a vibrant — and important — community of bacteria and other microbes (known as the oral microbiota) that you actually want to encourage.

That’s because they’re vital not just for your dental health but for your digestion, overall health and disease risk.

So far scientists have identified around 700 different species of oral microbes. You probably have 250 to 300 of them resident in your mouth right now.

This community of microbes remains relatively stable, despite an influx of other microbes from food, drink, breathing, nail-biting — and kissing (but more on that later).

Oral bacteria sounds like something your dentist would tell you off about. Yet just like your gut and on your skin, your mouth is home to a vibrant — and important — community of bacteria and other microbes (known as the oral microbiota) that you actually want to encourage

For sure, some of these microbes are not so good — cavities are caused when ‘bad’ bacteria in your mouth form a sticky layer (plaque) on your teeth; plaque loves sugar and produces acid, which then attacks tooth enamel. It’s plaque we brush away to prevent decay.

Since the 1960s, dentists have thought the bacteria Streptococcus mutans was solely responsible for causing cavities.

Now we know it’s more complicated than that and that good ‘oral’ bacteria are key.

Researchers have found that some lucky people have an oral microbiota that reduces the acidity in the mouth — by digesting food components and producing acid neutralisers such as ammonia (which is definitely not like the stuff you clean with), preventing cavities.

The same study, published in 2012 by the Centre for Advanced Research in Public Health in Spain, showed that some of these people also had a species that can kill Streptococcus mutans.

Others had loads of Streptococcus salivarius, good bacteria that help prevent inflammation in the mouth, reducing your chances of problems such as gingivitis (a form of gum disease and a common cause of bleeding gums when you brush your teeth).

When it comes to getting rid of the bad bacteria, you don’t need me to tell you about brushing your teeth etc — but the point is, this is not just about dental health.

For decades, scientists have known that gum disease is linked to heart disease — if you have gum disease you’re two to three times more at risk of a serious cardiovascular event such as a heart attack, for instance, possibly because bacteria that cause gum disease, such as Porphyromonas gingivalis, enter the bloodstream, raising levels of inflammation. 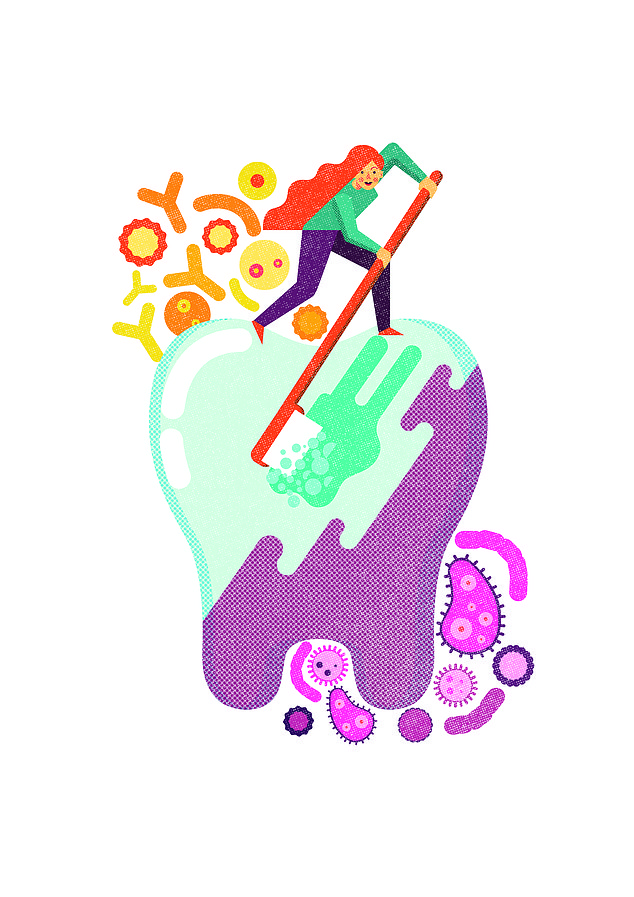 Since the 1960s, dentists have thought the bacteria Streptococcus mutans was solely responsible for causing cavities. Now we know it’s more complicated than that and that good ‘oral’ bacteria are key

As well as helping ward off inflammation and killing bad bacteria, good oral bacteria are really important for digestion itself.

When you chew — and even before that, when your taste buds are aroused by the smell and look of food — your mouth secretes more saliva, which is filled with digestive enzymes that get to work right away, breaking down the food you eat.

But we don’t have all the enzymes we need, so some of that work is outsourced to our microbes — starting with those in our mouths.

Your mouth bacteria can influence how you perceive the taste of food — a plant-based diet will alter your oral microbiome and, in turn, may make you crave more plants. Different mouth microbes produce different aromas when we eat the same food — which may help explain some differences in taste perception between people.

While you won’t brush away all your ‘good’ bacteria with your toothbrush, overzealous use of antiseptic mouthwash can wipe out a lot of them, with a knock-on effect on your health.

For instance, certain microbes turn the nitrates in fruit and vegetables you eat into nitrite — your body then converts this into nitric oxide, which keeps blood pressure in check.

But a University of Plymouth study in 2020 showed that using antiseptic mouthwash reduces the amount of nitrite in the mouth and blood, resulting in an increase in blood pressure in some people (the participants rinsed for one minute, twice daily with a mouthwash containing chlorhexidine, a common antiseptic ingredient).

This is because the antiseptic wiped out a host of bacteria — and we now know this level of cleanliness, outside of treating certain oral conditions, isn’t healthy.

The healthier your oral microbiome, the healthier your gut microbes. That’s because the right mouth microbes also act as a bodyguard for your gut. They’re primed to kill disease-causing pathogens, preventing them entering your digestive tract.

So how can you nourish your oral microbiota? Not surprisingly there are probiotic products being developed to do just that.

A study published in the Journal of Clinical Periodontology in 2013, involving 30 people, found that a probiotic lozenge (with the bacteria Lactobacillus reuteri), used twice daily, in conjunction with scaling reduced the growth of Porphyromonas gingivalis bacteria that cause severe gum disease, compared to just having scaling.

Separately, taking omega-3 supplements has a positive effect on the same condition, thanks to their anti-inflammatory effect, according to research by the Medical University of Lodz, Poland, in 2020.

Along with good oral hygiene, there are other simple, but important, dietary steps you can take to bring balance to your oral microbiota. Reducing foods high in added sugar deprives the cavity-causing bacteria of what they need to produce that damaging acid. When you do have sweet stuff — chocolate is a regular for me — rinse your mouth with water afterwards.

However, that’s not the only reason to limit added sugar. A recent review of studies, published in the journal Clinical and Experimental Dental Research, found that people with sugar-rich diets were more likely to have an imbalance of the oral microbiota and less diverse microbes.

And just like our gut microbiota, diversity is a marker of health, essentially because there are more microbes to keep each other (the bad ones included) in check.

Feed your oral microbes with the food they need to perform at their peak. What makes this easy is that these are the same foods your gut microbes love — prebiotic fibre from a variety of plant foods.

When it comes to fruit, go for your two pieces each day, but just like all sweet food, be sure to rinse your mouth with water after eating.

You could also try a bit more kissing. A 2014 study in the journal Microbiome found that with every passionate kiss (lasting ten seconds), we transfer an average of 80 million bacteria.

Try this: Sesame and kale crisps

A game-changer for all those who are anti-greens, it makes the perfect snack.

Preheat the oven to 160c fan/350f/gas mark 4. Place the tahini, garlic, oil, and salt into a large bowl and combine; add the kale and toss to evenly coat it. Sprinkle with sesame seeds.

On two lined baking trays, spread out the kale, minimising overlap. Bake for ten minutes, or until crisp, flip and repeat on the other side for five minutes.

Keep a close eye on the crisps and remove any that start to brown. Allow to cool before tucking in.

My bowel movements are to say the least, irregular. I often take a laxative at night, which works the next day, but then it’s back to periodic visits. Can you recommend anything to assist in regular successful visits?

The good news is that there’s plenty that you can do from a diet and lifestyle perspective to help with constipation.

As well as a high-fibre diet and staying well hydrated (at least two litres a day for most people), I’d recommend taking psyllium husk powder (available from most health food stores). Studies suggest that best results are seen with 10g per day (it takes around three weeks to see a full improvement): start with 2.5g, and increase the amount over a few weeks.

It’s also worth talking to your pharmacist about the different types of laxatives available, as they work in different ways (bulking out the stool, or drawing more fluid into the colon, or stimulating the gut muscles).

Some are better than others, but also come with side-effects. Take senna, for example — it’s a popular plant remedy but over time your gut muscles tend to become reliant on it and you may need to take more to see the benefit.